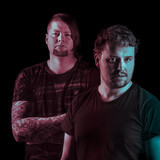 Hi! We’re Pil & Bue (pijl en boog/ arrow & bow), a Norwegian two-piece, originally formed back in February 2013, only seconds after the first jam. We’re happy to be back after a three year hiatus, with big changes in the line-up. Singer and guitarist Petter Carlsen is joined by drummer Gøran Johansen, following the departure of former drummer Aleksander Kostopoulos, for the forthcoming album; «The World Is A Rabbit Hole». «Aleksander wanted me to continue what we started with Pil & Bue after he unfortunately had to step away from the band. I’ve played in other bands with Gøran for a few years. He’s an amazing drummer and I felt it was natural for him to make his mark on this band in it’s next chapter. We’ve had a lot of fun jamming out these songs together, and I feel we’ve taken Pil & Bue further while still keeping the bands identity close at heart» - Petter The sound of Pil & Bue is raw and melodic with a twist of darkness. Topics are memories, childhood, aspirations, use of imagination, video games, and the intriguing online rabbit holes. Highlights -

The single 'You Win Again' is featured in the movie 'Dead Snow: Red vs. Dead' which premiered at the Sundance Film Festival January 2014. - ‘Fire’, from second album ‘Forget the Past, Let’s Worry About The Future’ (2017) is featured on the end credits of Hollywood/ Netflix blockbuster ‘What Happened To Monday’ (2017).