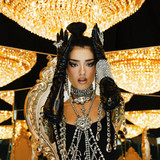 Multifaceted in her works, Dixie is a singer and one of the most followed digital personalities in the world. Her reach spans across all major social media platforms, where she has over 100 million followers combined and one of the fastest-growing YouTube channels globally. Since signing with HITCO and working alongside LA Reid, Dixie has entered the music industry with a rare ferocity. Her first single, “Be Happy,” was released in summer 2020 and within weeks entered the US Top 40, took the No.1 spot on TikTok’s sounds and Billboard’s Top Triller U.S. Chart. The shout-it-out anthem has been streamed more than 300 million times thus far, and the remixed version’s music video (featuring blackbear and Lil Mosey) garnered close to 20 million views in just one month. Within 1 year of her first single’s release, Dixie has worked with musical powerhouses Wiz Khalifa and Liam Payne on tracks “One Whole Day” and “Naughty List” respectively. Most recently in 2021 Dixie released, “FUCKBOY” a heartbreak pop song that pushed listeners to reclaim their power and uphold their standards while acknowledging the fallout of fuckboy antics, something universally understood in the world of young love in today’s modern dating culture. The song crowned Dixie as the first artist to land three #1 spots on Billboard’s Top Triller U.S. Chart. With each new release, Dixie continues to create pop hits that resonate with a global audience while tackling issues like the de-stigmatization of mental health.