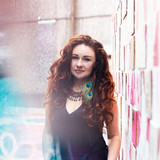 Irish singer, songwriter, instrumentalist and producer, Jennifer (Jeni) McMahon has been honing her craft over the last 15 years; performing on the Dublin singer-songwriter scene in the mid 00's before developing a more contemporary sound and joining the ranks of Dublin's Newpark Music Centre graduates in the mid 2010's. Then, straddling the boarders of soul, rnb and jazz, Jennifer released her debut album 'Part of The Whole' in November 2019. The album was recorded during her studies at the renowned Berklee College of Music where Jennifer gained her Masters of Music (Contemporary Performance & Production) in 2017, and features musicians from more that 20 countries. The album was penned following the death of her father, John, the breakdown of a long term relationship and the ensuing highs and lows. With the global pandemic arriving in early 2020, all plans to promote the album were shelved for the foreseeable future and Jennifer has delved into the creative process again, producing music in her humble home studio. 'Love Making', the first single of 2021 is a product of this time and has been well received. Jennifer is currently working on her 2nd album, and a number of singles for release in 2021.