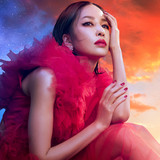 Mika Nakashima became one of the prime challengers to Ayumi Hamasaki, the undisputed queen of Japanese pop of the '90s. While not dethroning her, Nakashima still made a name for herself during the 2000s, achieving massive sales as well as critical acclaim with her brand of pop music that eschewed the teen bubblegum sound in favor of a pronounced smooth jazz influence. And there's little coincidental about her success, too, considering that she went for a musical career from a young age, skipping high school and college for its sake. Nakashima's rise to stardom was something in the way of a blitzkrieg. Born in 1983, she shot straight to the top at the age of 17, when she won an audition of 3,000 to star in the TV drama Kizudarake No Love Song, getting the chance to sing the drama's theme song, "Stars," to boot. The 2001 single, released on Sony Music, scored number three on the Oricon charts and went on to sell 600,000 units, and its follow-up, the limited-release single "Crescent Moon" (2001), sold all its 100,000 copies within a day. More well-charting singles followed, and Nakashima's debut studio album, True (2002), which came in their wake, topped the charts and crossed the million sales mark in three weeks, allowing her to sweep most of the Japanese "New Artist" awards in 2002. The EP Resistance (2003) also held the top position in the charts for two weeks in a row. Nakashima bested her own sales record with Love (2003), which shifted 1.4 million units and enjoyed strong sales in China, South Korea, and Taiwan as well. It also boasted the single "Yuki No Hana," which became one of the most popular karaoke songs of 2004 in Japan and was covered by artists from South Korea, Singapore, Hong Kong, and mainland China. Another single, "Find the Way," was used in the credits of Gundam Seed, an installment in a famous anime franchise. Nakashima eased up a little after that -- the EP Oborozukiyo-Inori charted at number three, and third album Music (2004), while reaching the top spot as well, had total sales of only 500,000 units, in addition to providing the theme song "Hi No Tori" for the anime series of the same name based on the works of "the god of manga," Osamu Tezuka. However, in 2005 her collection Best sold 1.2 million copies, and she landed a role in the live action adaptation of the popular manga series Nana and sang one of its theme songs, "Glamorous Sky," with the words composed by Ai Yazawa, author of the manga, and the music written by Hyde of L'Arc-en-Ciel fame. "Glamorous Sky" became Nakashima's first number one single and sold 440,000 units. A sequel to the Nana movie came out in 2006, also featuring Nakashima as the star actor and the theme song performer (the song being "Hitoiro," composed by Yazawa and Takuro of Glay), and later in that year the full album The End, credited to "Nana starring Mika Nakashima," was out as well. Nakashima's next single, "Cry No More," was recorded in Memphis, TN, and used in the anime series Blood+. She also recorded a song for a charity tribute for the victims of Hurricane Katrina, which led to her being recognized as an honorary citizen of Memphis. However, her fourth album, the gospel-influenced Yes (2007), only charted in Japan at number three and sold 296,000 units. That was partly remedied by a nationwide tour in 2007; a stream of singles, including one tied with the anime Life and sharing its title; and the rock song "I Don't Know," done in English and featuring the comedy group Morisanchuu. Nakashima's fifth studio album, Voice (2008), brought her back to the top of the Oricon charts and sold 320,000 copies during its chart run. ~ Alexey Eremenko, Rovi