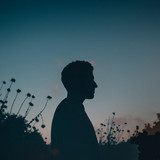 A citizen of two coastal cities, Melbourne and Tel Aviv, Asher Parkes takes inspiration from the calmness of the Mediterranean juxtaposed with the raw South Pacific. The 28 year old Melbourne-bred producer whose debut EP was described by Happy Mag as a “truly unique sound of ambient indie-pop,” and by Tone Deaf as “showing more than mere promise,” Asher left to explore the frequencies of the northern hemisphere and landed in Tel Aviv, a micro-metropolis on the Mediterranean. Once settled, he released a second record, “a lesson in minimalism and class.” (Cougar Microbes) Since headlining the most recent Tune In Tel Aviv international conference, Asher spent January of 2020 in New York City recording his new single “Darkness Shining Through,” an emotive listen crafted with collaborator Low Gem and achieving rare depth in its downtempo electronic beats. Asher reveals the curvatures of his heart until they seem familiar to listeners, as if they’ve found home in the space his music carved out. Having worked with Bob Power in New York City, Japanese Wallpaper and Andrei Eremin (Chet Faker) in Australia, and mixing for his contemporaries in Tel Aviv, Asher traverses his distinctive tone and sense of place with nods to Massive Attack, Shallou, and Nils Frahm.