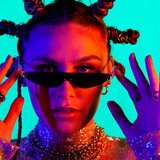 Her most successful single ‘Warrior Cry’ reached over 2.1 millions views on Youtube. Recently a social pandemic project - 'No More' was created during lockdown in collaboration with composer Artem Pivovarov. An experimental pop-rock sound which highlights the importance of equality and diversity. An additional music video was made containing 90 influencers from over 25 different countries from all over the world. This year KERRIA is bringing back her passion for trance music. In collaboration with producer Mike Kintish and Sam O’Niels, a track called Riding On was written. Big inspiration came from trance legends such as, ATB, Tiësto, Armin van Buuren, Cascada, and Emma Hewitt. KERRIA writes about her personal experience with someone closer than you may typically think. A positive message of Riding On illustrates how a complicated relationship can gift you the strength you’ve never had before. Influenced by the best elements of trance, Riding On is an uplifting and an empowering track.