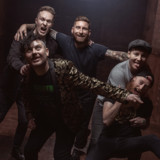 The last few years have been a wild ride for Melbourne punk rock group Captives and now, looking down the barrel of 2021’s second half, the band is charged and ready to get started once more. When music fans first met the Melbourne-via-Tasmanian group back in 2013, Captives’ early potential shone strongly. Quickly gaining the attention of Triple J and Triple J Unearthed off the back of singles like ‘Insomnia’, as well as their self-titled debut EP and it’s successor Butterflies, Diamonds and Lightning, the band became a new force to watch. Since the release of their debut album Over The Rainbow in 2018, Captives graduated to becoming one of Australia’s most formidable bands bringing striking rock and punk influences together in producing a sound both piercing and engaging. 2019 saw Captives take things internationally for the first time, bringing the music to audiences in Japan. The tour laid the foundations for Captives and a strong base of Japanese fans. The band returned to Japan just prior to the COVID-19 pandemic, this time including a run of shows throughout Taiwan. Written and recorded in between Melbourne’s many lockdowns, the new Captives album sees the band hungrier than ever when it comes to new music. Set for release in 2021, the material is a fitting reintroduction and a reminder of the calibre of music the band has become synonymous and respected for.