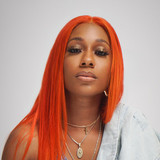 Hailed by JET Magazine as “one of the most determined and versatile millennials in the industry today,” Tiffany Evans has established herself as an artist, actress and entrepreneur. The South Bronx, N.Y., native broke onto the scene when she was just 9. In 2003, Evans made her national debut on the hit talent show Star Search, hosted by comedian Arsenio Hall. Fresh off Star Search, Evans landed a deal with Columbia Records. While recording new music, Evans discovered her second passion -- acting. Between 2003 and 2005, Evans landed a few television and movie roles on CBS’s The District, NBC’s Law & Order: Special Victims Unit and Tyler Perry’s debut feature film Diary of a Mad Black Woman.

By 2007, Evans was a teenager and made a splash with her debut single, “Promise Ring,” featuring Ciara. Co-produced by Mr. Collipark and The Clutch, “Promise Ring” turned Evans into a teen sensation. The song reached number one on Billboard’s Bubbling Under Hot 100 chart.