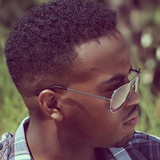 Jamaal “Key Jay” Ephriam intricately fuses various genres of music; uniquely capturing the very best of sonic excellence in each style. Born and bred into the entertainment industry, the young phenomenon discovered the piano while listening to the sounds of his parent’s R&B, Gospel, Funk, Reggae and Jazz bands at a very early age. His curiosity got the better of him and shortly thereafter, Key Jay was tickling the ivory. Amazed by his gift, Key Jay’s parents began cultivating and nurturing his skills at the tender age of 5. Throughout his formal years of training, Jamaal mastered many classical pieces and soon after began studying jazz piano, mostly independently. Jamaal is now an accomplished pianist, keyboardist, vocalist, and guitarist and is well-versed in several genres including but not limited to Jazz, R&B, Hip Hop, Rock, Classical, Gospel, Electronic Music, and many more. Throughout the years, Jamaal has caught the attention of many Miami based acts, produced and mixed various tracks and productions for both studio and live performances, and has also performed on many stages including the 2009 Miami Music Festival, Beer Festival, Hard Rock, Transit Lounge, and more. There is much to be said about Key Jay. Probably the only thing Key Jay doesn’t know how to do (yet) is make French Bread Pizookie…then again, no one knows how to make French Bread Pizookie. https://keyjayonline.com