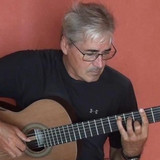 Wolfgang Vrecun is Austrian classical guitarist. He is well known for his great classical guitar arrangements and videos watched by millions of music fans all over the world. Wolfgang's instruments are nylon string guitars built by Simon Marty and Philip Woodfield. Wolfgang Vrecun´s music is a musical crossover. He likes many music styles, pop, jazz, latin, classic as well and he likes to arrange songs. But there are also a lot of fine compositions which also can be heard on YT. He is a teacher in a school with main focus on music. So he invited also Adam Rafferty for some guitar lessons and playing some pieces (solo and together) of course.