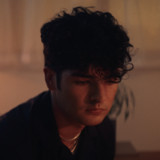 Harper Finn bends the style boundaries of pop, centering his handwritten gems around an infectious kinetic energy and the twists and turns of youth and young adulthood. Live music has always been a large part of Harper’s life. Working nights at a local venue in Auckland’s downtown, he was exposed to the powerful connection between music and youth culture, watching bands like post-punk gamechangers IDLES and pop megastar Billie Eilish perform to passionate, sweaty crowds of fans. Most fittingly perhaps, was that his first solo show took place on that very stage. During this time, he was studying History and Politics at The University of Auckland, where he began to develop an interest in thinking critically about memory; this inspired the route his songwriting would take, in debt to collective consciousness and fleeting snapshots of his youth. Harper’s music is an ode to the coming of age; reflections on his life, on others’ lives, as observations of modern love, youth and young adulthood.