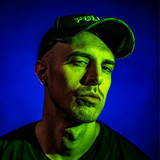 Raised in West Hollywood, with an Italian American DNA and a strong underground addiction, Jeff Eveline is an artist who has established his stage persona as a dark, intriguing and much sought-after selector through very long and fairy DJ sets. Jeff dove into club music early in his life, socializing with ideas and tastes from a broad and diverse range of sources: from New Wave, Electro, Techno to Hip Hop, along with artists like Damian Lazarus, Dj Hell and Kanye West, bumping his buzz up and building his own wave. Eveline’s touch sounds instantly dramatic, riding on sultry grooves, grainy effects, indistinct vocals, exotic drum fills, dark and narcotic melodies which converge for a storyboard full of character and colors. This engaging approach has brought him to the attention of worldwide DJ star Sam Paganini, and the stuff resulted from this partnership had enthusiastic feedbacks by DJ-Mag USA. Besides that, Jeff has performed from the native Los Angeles to Miami via Ibiza, London and Berlin, and he’s always intrigued and eager to watch the untold stories behind every new stage and audience around the world.