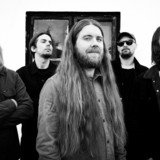 Dunderbeist has gone from being an eight-man orchestra with a bus load of stage elements, make-up, costumes and tight choreography to become a pure hard-rock playing band. Where the main focus now lies in the immediacy of the musical exercise itself and the presence of the music, just as you are present in the warmth of the light, the rumbling sound from the speakers and all the good people around you. In a world where the easiest way out wins every time and technical solutions take shortcuts for the good experiences - Dunderbeist will never let go of the hours it takes of honing the craft and refining an idea before presenting it to everyone else. Old school cool. The band is a progressive hard rock band with five musicians who have been through over a decade together. 8 releases have constantly tried to push their own boundaries in relation to songwriting, collaboration and dissemination of their own signature. Each of the 8 releases have each had its own independent form and conceptual framework as a solid foundation for the development of a unique musical signature. Dunderbeist has a strong local roots in Hamar and Hedmark. The lyrics are sung on dialect and the band uses local linguistic peculiarities to formulate what they believe to be an underlying Fandenivoldian characteristic of the forest-heavy county. Dunderbeist will start touring in the beginning of 2021 with a new album fresh out of the woods. “URO” is out now!