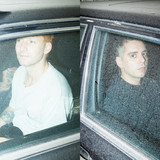 ALDO is comprised of Andre and Mura Faria, two brothers from São Paulo, Brazil, who formed a band in homage to their Uncle Aldo. A once wayward character, Uncle Aldo lived an edgy lifestyle in 1990’s Brazil. He would take the young boys on journeys into São Paulo’s dark underbelly introducing them to scenes of illegal car racing, suspicious back-alley negotiations, football gang violence and carnival parties, all drenched in alcohol. The wide-eyed brothers took it all in, and later, combined these youthful experiences with beats Mura had begun to work on, whilst Andre picked up the bass. However, they needed their uncle’s blessing. The ‘90s had been a time the Faria family had wanted to forget. Aldo was now a changed man, his old ways long behind him; he had cleaned up his act and had embraced the Church. The idea of these misdeeds being given new focus brought about arguments and upset. Andre and Mura, however, persisted. After much convincing, Uncle Aldo eventually consented with a broad smile, and ALDO was born. He even gave them his mammoth vinyl collection which had been locked away for years. The brothers added new musicians to their live band and began gigging regularly on the São Paulo music circuit, quickly growing a following and garnering attention from the Brazilian media. ALDO have now become a staple of the Brazilian live scene, supporting acts such as Caribou and Clap Your Hands Say Yeah and last year opening for Radiohead at the Allianz Park Stadium.