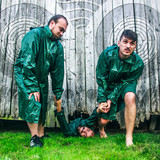 Hailing from Croatia, Them Moose Rush are a progressive rock band unlike any other. The trio have always done things for themselves, and in doing so, done it all inimitably. From directing their own music videos to producing their own photographs, the band even has a penchant for hiding cyphers in songs such as Morse codes on keyboards messages or making symmetrical song parts which sound the same if played backwards. And away from the devil in the detail, they simply rock harder and faster than anyone else. From lead singer Nikola Runjavec’s devastating vocal range, spanning a sonic spectrum that takes in Robert Plant, Cedric Bixler-Zavala & Jack White, to bass player Branimir Kuruc and drummer Vedran Marinko Komlen’s tight ship of a rhythm section, TMR is a progressive, space-fuelled majesty of electric alt-rock and Machina melody. Band has established as live fixtures on the European festival and tour circuit, performing at Eurosonic Showcase (Holland), Europavox (France), Sound City (UK, INmusic (Croatia), Krach Am Bach festival (Germany), sharing the stage with big bands like QOTSA, The Black Keys, Pixies, Colour Haze, The Vintage Caravan and Mars Red Sky. The band has received many significant worldwide praise from influential magazines like Prog, Metal Hammer, Metal Injection, Everything is Noise etc. Band has recently released their album “Dancing Maze” which is getting great press reactions.