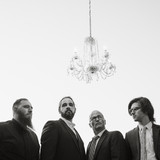 Farewell Friend is a North Carolina based folk rock band based in Greensboro, NC. The band consists of Tom Troyer (guitar, vocals), Aaron Cummings (drums), Mark Byerly (electric guitar, resonator, pedal steel), Evan Campfield (upright bass), and occasionally includes musician Caleb Baer (mandolin, violin, viola). Farewell Friend’s music is first and foremost an exploration of poetry, narrative, and storytelling. Their sound is a delicate avalanche of sonic texture. A presentation of recognizable and distorted folk and americana forms. [SAMSON] - releasing August 2021 - is an autobiographical exploration of Troyer's childhood growing up as the son of a small town preacher in rural Indiana, feelings of being an outsider in the South, and the lonely disappointments of his twenties. Examining the political moment of the last 5 years by deploying the stories of Old Testament tragic heroes and the fragmented American masculine identity. The album is cathartic shadow work explored through up front vocals and acoustic instruments while introducing raw electric textures, modern synth, and minimal percussion. If the Samson of the Old Testament is a cautionary tale, this album is a knowing nod at the hazard lights and an echo of the fog horn before the hurricane.