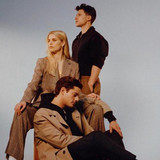 English trio London Grammar combine sparse electronic pop in the model of the xx with lead singer Hannah Reid's dramatic, soulful vocals, which evoke Annie Lennox and contemporaries like Florence Welch and Natasha Khan of Bat for Lashes. After reaching number two on the album chart in the U.K. with their debut, 2013's If You Wait, they topped the chart with 2017's Truth Is a Beautiful Thing. Reid and guitarist Dan Rothman met in the dorms of Nottingham University, where they began writing music together in 2009 and later added multi-instrumentalist Dot Major to complete the lineup. The following years saw them refine their sound with atmospheric electronics and subtle percussion, and they often played to rooms of no more than ten people. Their popularity rose with the 2012 release of "Hey Now," which they uploaded to the Internet, instantly finding a digital cult following. Their fans were not just in the U.K., but also on the other side of the world in Australia, where their self-released 2013 debut EP, Metal & Dust, reached the top of the digital charts. The same year, they signed to Ministry of Sound, and the single "Wasting My Young Years" appeared as their first release on the label. The year 2013 also saw them play a sold-out show at the Islington Assembly Hall and make an appearance at the Great Escape Festival in Brighton. In September 2013, London Grammar released their debut album, If You Wait. It landed at number two on the U.K. album chart and hit the Top 20 in Australia, New Zealand, France, and Ireland. After receiving such positive reviews, the trio headed out in support of the release in 2014, culminating in two sold-out shows at London's Brixton Academy. That same year, they picked up two Ivor Novello awards for the single "Strong" as well as two AIM awards for Breakthrough of the Year and Most Played Independent Act. After a whirlwind 2014, the trio retreated into their normal lives, rekindling friendships and writing music. At the beginning of 2017, the group released the first fruits of those sessions, the single "Rooting for You." Sophomore album Truth Is a Beautiful Thing followed that June. With collaborators including Paul Epworth, Youth, and Jon Hopkins, the album saw the trio taking their sparse electronic pop into more cinematic territory, becoming their first U.K. number one. The group was featured on the Flume track "Let You Know" in 2019, then returned with "Baby It's You," the lead single from their third album, in August 2020. The third project, titled Californian Soil, arrived in early 2021. ~ Scott Kerr & Rich Wilson, Rovi