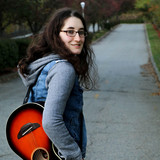 Amanda Rose Riley doesn’t believe in waiting to pursue a dream. She’s the type of artist to record albums in her bedroom when she can’t afford a studio, to follow a religious weekly live streaming schedule in the face of a global live music shutdown, and to bring a guitar with her on every trip she takes just in case there’s a nearby open mic or other opportunity. She writes constantly, and has taken on multiple songwriting challenges like a song a week for a year or 50 songs in 90 days. Her hard work and determination have led to incredible opportunities like performing with The Bouncing Souls at the Stone Pony and with Frank Turner (her favorite artist) on multiple occasions, not to mention a wide variety of other performances from New Jersey to Boston to the middle of the UK. It all seems to be paying off as her quirky acoustic songs, understated voice, and raw authenticity are resonating with a growing number of online followers who purchase her music and give tips during her live streams. She has eclectic influences ranging from punk to pop to folk and everything in between. But mostly, she is just herself, hoping it will ultimately connect with others. Her newest album, The Fine Print – written in 2020 and self-produced this year – deals with themes of overcoming anxiety and becoming empowered to live according to her own dreams and desires.