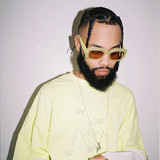 Chaz French overcame a near-death car accident and homelessness on his way to becoming a highly motivated, moment-seizing rapper with a major-label contract. Born in Washington, D.C. and raised in Maryland, French developed his talent in the D.C. area and issued his first mixtape, Happy Belated, in 2014. A second tape, These Things Take Time, arrived the following year. After he had opened for Waka Flocka Flame and toured with the likes of Wale and frequent collaborator GoldLink, French completed True Colors. The album was released in August 2017 through a partnership between his ThreeSixEight label and Motown. Fellow Motown artists BJ the Chicago Kid and Kevin Ross, along with the likes of Curren$y and Casey Veggies, were among those who made guest appearances. Later that year, he released the Kill, Vol. 1 mixtape, showcasing more talent from the region surrounding the capitol, which is known as the DMV. French returned the next year with the "Can't Stop Us" single and "Caliente," a collaboration with IDK and Jay 305. "Handful," with Rich the Kid, appeared in 2019. ~ Andy Kellman, Rovi