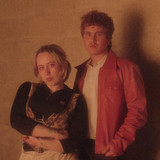 The music Avery Tucker and Harmony Tividad release as Girlpool occupies a transient space. Their constant evolution makes it perfectly impossible to articulate exactly where their project falls within the contemporary musical canon; this is one of the many reasons Girlpool’s music is so captivating. Never before has a group’s maturation been so transparently attached to the maturation of its members. This is due in large part to the fact that Girlpool came into existence exactly when Girlpool was supposed to come into existence: at the most prolific stage of the digital revolution. Both online and in the flesh, Tividad and Tucker practice radical openness to the point where it may even engender discomfort; this is exactly the point where it becomes clear why theirs’ is such a special project: they accept the possibility of discomfort—Chaos—and show you how to figure out why you might feel it. This is achieved through their ability to empathize as best friends and partners in creation, with the intention of making music that provokes. What Chaos is Imaginary is a collection of songs unlike any Girlpool songs you’ve ever heard, exactly what Powerplant was to Before The World Was Big. For the first time, it is clear who wrote what song. 2019 will see drum machines and synthesizers and beautiful/new harmonies and huge guitars and at least one orchestral breakdown by a string octet.