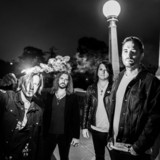 The Pride are a Los Angeles-based four piece that play fast, melodic rock influenced by artists like The Wildhearts and Cheap Trick both known for their mixture of pop sensibilities, raw guitars, and driven tempos. Singer and songwriter Daniel McGuffey leans into simple song structures, major keys, and upbeat, sing-along choruses to compliment his bleak, introspective lyrics, while Ryan Hudson’s vocal harmonies and riff-heavy guitar playing introduce grit and depth to each song. Thematically, The Pride’s music deals with heartbreak, addiction and recovery, anxiety and depression, and resentment, with an emphasis on admitting fault, taking responsibility, and trudging forward. Daniel says his lyrics are influenced heavily by country singers like Roger Miller and George Jones who have a knack for taking weighty topics like substance abuse, shame, regret, and grief, and wrapping them in catchy melodies with sincere storytelling.   The Pride formed in 2015 when Daniel reached out to Ryan Hudson and bassist Justin Emord, both of Love and a .38 seeking help to record the band’s debut EP “Yakuzamerica." In 2019 the band recruited drummer Brian Sheahan of St. Louis punk band BAMF! and began working on new material. They recorded their 2020 EP “Too Damn Late” in their practice space by themselves with Ryan as the producer.