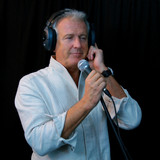 You whistled a melody in your smartphone and a couple of months later you hit the charts! This happened to Gliffo, the German newcomer, who woke up one morning with a melody stuck in his head. He whistled this melody in his smartphone and sent it to a friend in Berlin who - as it happens – is a music producer and artist himself (Jo Oliver). The debut single “Get The Sun In Your Head” had been released in Feb. 2019. The music video also produced by Jörg Sieghart – earned 376.000 views in the meantime (Feb. 2020). Gliffo reached several chart positions (including Nr. 1 with "Island Of Tears")

in the German Amazon Charts and reached the MTV-USA Spotify Charts with "Saide (sad song)", the "saddest song in the world"! In Feb 2020 Gliffo had been awarded by the Song Of The Year international song contest and received the “Runner Up Songwriting Award”. Gliffo feels proud about this honor, especially because to the jury judges belong