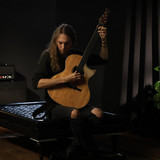 Mike Dawes is hailed as one of the world's finest modern acoustic guitar players. He was voted 'Best Acoustic Guitarist in the World' by Total Guitar Magazine & MusicRadar twice consecutively, in both the 2017 & 2018 readers polls with two additional 2nd place rankings. His solo music, littered with virtuoso nuances and micro-techniques, has seen him tour almost every continent on the planet. He has recorded with multiple grammy award-wining and Rock n Roll Hall of Fame inducted artists, featured on international film and TV and achieved over 100 million music video hits online for his solo covers of songs like Somebody That I Used To Know, Slow Dancing in a Burning Room, Jump, Titanium (feat. Sia) & One (Remastered), as well as his originals The Impossible, Boogie Shred, Boogie Slam & more. Additionally, Mike tours as lead guitar player for Justin Hayward, performing The Moody Blues classics throughout the world. He has also teamed up with grammy-nominated Periphery vocalist Spencer Sotelo and ex Sunrise Avenue multi-platinum producer Jukka Backlund to form Nik Mystery, a popwave trio based out of Las Vegas. Mike's third album, and first live release 'Shows and Distancing: Live in the USA' is out now, in addition to multiple 2021 singles both solo and collaborative, featuring the likes of Plini and Tommy Emmanuel.