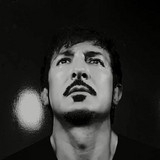 Mario Grande began his activity as musician by making soundtracks for the cinema. In 2008 he founded the label M.B.C. musica and he organized music festivals and concerts. Encouraged by his music colleagues, he decided to publish some of his musical compositions and in 2008 "Viaggi sul tempo" saw the light. The first single from the album "Oronero" (Black gold), reached the top step of the podium of Italy’s ITunes chart. In 2011 arrived the single "Al mercato delle foglie". In 2014 "Al centro del Nord was released, it is a pop song with rock nuances. In 2017 "Ogni singolo momento" was published, an intense and melodic composition. From this moment on, Mario Grande personally directed his videoclips. In 2018 arrived "In qualche angolo di me" a song with a vintage spirit. In 2019 the new album "#capitolosecondo" comes out, "Immobile" is the single and videoclip that open this new project.