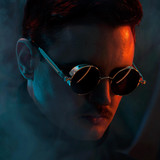 As L-Vis 1990, James Connolly hasn’t just survived in the volatile world of electronic music – he’s thrived. Connolly has been at the forefront of electronic dance music for nearly a decade, leaving his mark as a gifted producer, a boundary-pushing DJ & promoter, a forward-thinking co-founder of an influential label, a cultivator of new talent, and, increasingly, as an envoy who brings electronic music to new spaces and platforms. At the turn of the decade, he founded the groundbreaking Night Slugs club night and label with Bok Bok, releasing essential records by Jam City, Girl Unit, Kingdom, & more. As L-Vis 1990, he released his futuristic-yet-reverent takes on club music – not just on Night Slugs, but via labels PMR/Island, Mad Decent, Sound Pellegrino, Ultramagic & Clone Records. Connolly has also taken his artistic endeavors beyond the dancefloor: he composed music for a hybrid opera with Matthew Stone, and co-directed a short film and music videos. And with the same steady hand and eye for talent that has girded his leadership of Night Slugs, Connolly has moved on to developing fresh new voices like Lafawndah, Mista Silva, Flohio & Gaika.Whether producing by himself or with collaborators; operating one of electronic music’s finest labels; scoring documentaries, fashion shows and hybrid operas; or DJing gigs across the globe, L-Vis 1990 continues to leave an indelible mark in the ever-changing world of electronic dance music – and he’s just getting started.