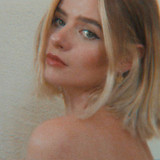 Carney was born in Hampshire, England and at 10 years old moved to Donegal on the northwest coast of Ireland. Inspired by the rugged and picturesque landscapes of her new home, she began writing music, leaving school at just 15 to showcase in New York and Los Angeles. Her later teen years were absorbed by twin struggles of asserting herself creatively in a major label system – ultimately leaving it all together - while facing her own challenges with mental health. Throughout it all, the one constant has been her songwriting, which is both cathartic and empowering.