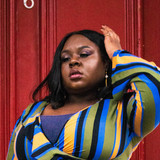 Claire B.Donzet (Claire Bitumba-Donzet) is a Gospel singer born in the Democratic Republic of Congo. She grew up in France where she lived there until the age of 19 years old before moving to England in 2006. ​ She received this gift from God to touch people through music and it has been a passion since she was a child. She has been ministering in many churches and been involved in praise worship teams for many years. Claire is also a songwriter and composer. She is influenced by a diverse types of music from African to Hip hop, RnB, Pop and soul. The South London singer previously released the track 'You are'. She came back this year with her new single 'I am your child' from her prophetic songs project 'Journey to Destiny' available on all music outlets. Claire B. Donzet has been in the UK and France to promote her music in churches, charities events and radio interviews. The crowd generated a genuine interest in the way she performs and the message she is bringing across. Claire is not just a singer abut also an anointed minister who is on a mission to bring the gospel through the word and music.