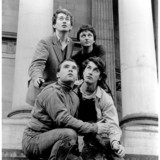 Gang of Four is one of the most radically important, and influential rock groups of the last 40 years. The Red Hot Chili Peppers, INXS, R.E.M., U2, Rage Against the Machine have all spoken of their debt to Gang of Four. More recently, the band's influence has extended to Franz Ferdinand, Nine Inch Nail, St Vincent, Sleater Kinny and James Murphy of LCD Soundsystem amongst many significant others, with today's creators of angular rock music having GO4's influence and imprint all over it. GO4 has also reached an urban audience with Frank Ocean sampling GO4 on his Blonde album and Pharrell discussing GO4 in both the New York Times and Britains' Guardian.

"Bands occasionally get described as being 'ahead of their time'. Usually it means nothing; mere hack hyperbole . . .