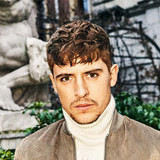 Lil Kleine, better known as Jorik Scholten, has many successes to his name. His album ‘Alleen' (2017) was in the top 10 of the Dutch album charts for over a year - the most successful album ever released by his record label Top Notch. His hit track ‘Verleden Tijd’ with Frenna even broke a Dutch Spotify record with more than 930,000 streams in 24 hours. He is also known for being a coach at The Voice of Holland and he recently started his own clothing brand JORIK.