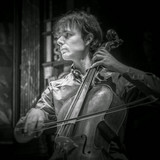 www.woutervercruysse.com   Wouter Vercruysse (°1981 Courtray, Belgium) holds a Master of Music degree with highest distinction for cello at the Royal Conservatory of Ghent, where he was under the tutelage of Judith Ermert. Prior to his studies in Ghent, he had the privilege of studying with Jan Van Kelst at the Conservatory of Courtray. Armand Coeck has been Vercruysse's personal mentor, under whose tutelage he has been able to expand his skills as a guitarist, improviser, composer, and chamber musician. Just as well, he has taken masterclasses in cello from multiple Grammy Award winner Yo-Yo Ma and had chamber music coaching from Rainer Schmidt (Hagen Quartet) and Claus-Christian Schuster (Altenberg Trio of Vienna). To his credit, he has won first prizes in the Belfius Classics and Rotary competitions. With the St. George Quintet he became laureate of Supernova in 2016. With Duo Edenwood, he received a Second Prize in the Concours International Leopold Bellan Paris. As a soloist and chamber musician, he has performed concerts in the world's most prestigious halls: Carnegie Hall of New York, the Shanghai Oriental Arts Center, Cité de la Musique in Paris, the Muziekgebouw aan 't IJ in Amsterdam, and the BOZAR Center for Fine Arts in Brussels. He is founding member of Edenwood Duo and the St. George Quintet. In the world music scene he performed with Yo-Yo Ma and the Silk Road Ensemble, Kudsi Erguner and Osama Abdulrasol.