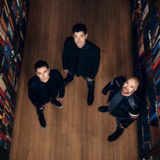 The Script are one of the world’s most successful bands,

with 5 UK number 1 albums, 6 billion streams, 30 million single sales, 11 million album sales, 13 million monthly Spotify listeners and 2 million tickets sold across headline shows globally. Now they release Tales From The Script, the first ever best of from a band with enough hits and fan-favourites to make that a blockbuster 18-track double album. ‘Tales From The Script’ compiles all of the biggest hits and fan favourites from their six albums so far. It highlights the classic cuts from the trio’s catalogue, taking in the likes of the #1 smash ‘Hall of Fame’ (featuring will.i.am) and the Top 10 hits ‘The Man Who Can’t Be Moved’, ‘For The First Time’ and ‘Superheroes’. It also includes landmark moments and staples of their live show including ‘Breakeven’, their debut single ‘We Cry’ and ‘Rain’. The collection honours everything that the trio - Danny O’Donoghue, Glen Power and Mark Sheehan - have achieved together since forming fourteen years ago and is completed by the brand new song ‘I Want It All’