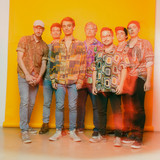 It all started when three friends and founding members Sebastian Antosch, Max Legat and Moritz Holy had the privilege to make music on an annual openair festival in Vienna. Despite the rain more and more people streamed in front of the stage, making the evening a special experience and the starting point for a musical vision. As fate would have it, the french bulldog Mashiko, a fellow companion died that evening but was reborn at the same time: The band Mashiko saw the light of day. The band expanded when Stephanie Weninger and Gunther Schuller added analog and digital sounds. For the debut EP called To The Sky the band featured the two exceptional vocalists Gregor Bischops and David Sladek who joined the creative process. The result is a mixture of heavy funk, soul and r´n´b with strong rhythms, rich harmonies and beautiful melodies. Currently Mashiko hit the studio again and new soulful music is in the making!