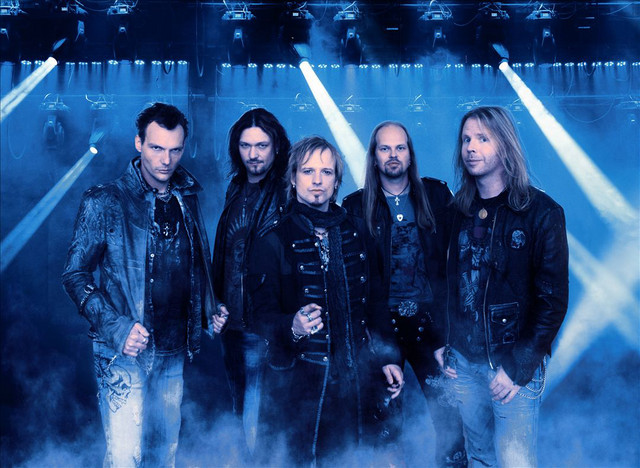 Neo-classical metal band Edguy were formed in Fulda, Germany in 1992 by then-students Tobias Sammet, Jens Ludwig, Dominik Storch, and Dirk Sauer. Although they were only 14 at the time, the young bandmembers worked on original material, and by 1994 they had released two demos. These early recordings were sent out to various record companies to no avail. Steadfast in their convictions, they self-released their debut album, Savage Poetry, in 1995. It wasn't long before a record company showed interest, and they signed with AFM. The label was keen to distribute their debut, but Edguy chose to forge ahead with their follow-up instead. The resulting record, Kingdom of Madness, was released in 1997, with Storch departing shortly thereafter. He was replaced by drummer Frank Lindenthal for 1998's Vain Glory Opera, and the album upped their profile thanks to some notable guest spots from Hansi Kürsch (Blind Guardian) and Timo Tolkki (Stratovarius). The addition of drummer Felix Bohnke and bassist Tobias Exxel freed up Sammet to focus on vocals. They continued to produce a record a year, with Theater of Salvation arriving in 1999, while Sammet also worked on a metal-opera project, Avantasia. While he was busy with Avantasia, the other bandmembers re-recorded their self-released debut, which had become quite a rarity. The year 2001 marked their last studio record for AFM, Mandrake, which they followed up with the live album Burning Down the Opera Live. Edguy then signed to the independent record label Nuclear Blast, which put out the King of Fools EP in 2004. They continued to churn out records regularly during the next few years, with Hellfire Club appearing later in 2004, the Superheroes EP in 2005, and Rocket Ride in 2006. Sammet returned to his Avantasia project in 2007, but it wasn't long until the band was back in the studio recording Tinnitus Sanctus. Their first DVD release, Fucking with Fire: Live, arrived in 2009, and in 2011 they put out their ninth record, Age of the Joker. Touted as the heaviest record they had made to date, Space Police: Defenders of the Crown came out in 2014, and was well received by critics. By 2017 the band had released another live collection. Monuments was a two CD/DVD set that combined old and new material. ~ Bekki Bemrose, Rovi