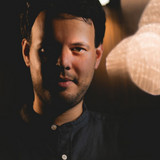 Yotam Ishay (1990) is a composer/pianist influenced by Impressionist, Jazz, and Middle-Eastern music, originally from Afula, Israel. Aside from being active as a bandleader, he collaborated with artists like Zakir Hussain, Shankar Mahadevan, and Javier Limón. Yotam has also been active in the classical field and is a twice finalist of the International Antonin Dvorak Composition Competition. His compositions & arrangements have been performed globally. Music from his debut album "Opus 1" has been used in Netflix shows and media.