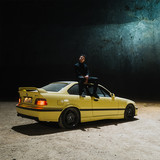 Singer, songwriter and producer: Nico Santos is an absolute exceptional talent. A versatility that covers genres from pop to hip-hop to R&B and deep house to film music. The 15 gold and 20 platinum awards - not only in Germany, Austria and Switzerland, but also Australia, Mexico and Spain - speak for itself. After the 28-year-old released his self-titled Top 3 album last year, he took a little creative break. Now he returns with two songs in a row.   "End Of Summer" combines classical guitar and piano sounds with atmospheric vocal samples and creates a melancholic melodic sound of its own, to which Nico is saying goodbye to the past. Nico Santos wrote the song not only with his well-known team of Pascal Reinhardt and Joe Walter, but also with Sophie Simmons, a songwriter from America. But even apart from that, "End Of Summer" is a special song.