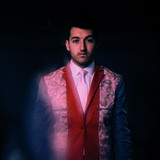 Without a name and without means, Jake Schafer is inspired by the beauty of opportunity. His hometown escape from Indianapolis, Indiana established himself as an artist and producer working in some of the biggest studios in Nashville. Jake began his solo career producing for himself after a falling out with a close friend. When asked what moved him to pursue producing for himself Jake claimed, "the goal is to fill the gap between what was, and what could be." The only way to complete a production is to do it himself. Jake believes this is why his music is evolving so rapidly and effortlessly. Especially with a background filled with unwanted drum and piano lessons (parents am I right). Jake grew only to grow apart from himself. He often refers to this phenomenon as The Space Between. The title of his second solo project. That is the beauty of opportunity.