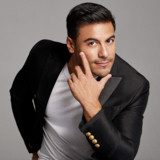 Carlos Rivera is a Mexican pop singer and stage star who rose to fame as the first-place winner of the reality television show La Academia in 2004. Born on March 15, 1986, in Huamantla, Tlaxcala, he signed a recording contract with Sony-BMG in the aftermath of his first-place finish on La Academia and made his full-length album debut with Carlos Rivera (2006). The album includes a pair of singles, "Te Me Vas" and "Y Si Tu Supieras," the latter the song from the film Mar de Sueños, and it also includes "Eres Total," the theme song from the telenovela Amor sin Condiciones. That same year, Rivera ventured into theater, starring in Besame Mucho, Orgasmos la Comedia, Beauty and the Beast, and Mamma Mia. In 2010, Rivera released his second album, Mexicano, a collection that included his versions of Mexican classics that spawned another pair of singles, "La Malageña" and "Amar y Vivir." The next year, he reached a turning point in his stage career, securing a role in Spain's production of Disney's The Lion King. In the role of Simba, he went on to win the Best Newcomer award from Broadway World Spain. He expanded his audience in 2013 with the release of his third album, El Hubiera No Existe, which spread his popularity across Spanish-speaking countries outside of Mexico. A live album followed, compiling his greatest hits. Years after his breakthrough performance in Spain's Lion King, Rivera would reprise his role as Simba for Mexico's own production in 2015. The following year, he released his fourth LP, Yo Creo, which debuted at number one and was supported by a sold-out national tour. ~ Jason Birchmeier & Neil Z. Yeung, Rovi