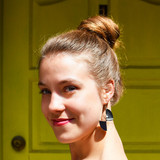 Anna Szalucka is an exciting multi-award-winning Polish pianist recognised for her exceptional musicality and intense virtuosity. She completed the bachelor’s degree at the Stanislaw Moniuszko Academy of Music in Gdansk studying with Waldemar Wojtal. She then continued her studies at the Universität für Musik und Darstellende Kunst, Vienna in the piano class of Stefan Vladar and later on at the Royal Academy of Music in London under the supervision of Ian Fountain where she held the Hodgson Piano Fellowship in the years 2017–18. Anna Szalucka has given numerous concerts and recitals around the world co-operating with such institutions as The Fryderyk Chopin Institute, the Wiener Beethoven Gesellschaft, the Arthur Rubinstein International Music Foundation, the Worshipful Company of Musicians, as well as BBC Radio 3, BBC Radio 4 and Classic FM. As winner of the 2016 Tallinn International Piano Competition in several categories, she was invited to perform with the Estonian National Symphony Orchestra. She has also appeared as soloist with the Polish Radio Orchestra, the Worthing Symphony Orchestra, the Sinfonia Baltica and the Pomeranian Philharmonic, among others. In Poland, Anna Szalucka was awarded the Ministry of Science and Higher Education Prize as well as the Ministry of Culture and National Heritage Prize for exceptional achievements in music.