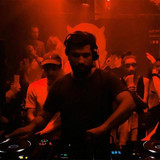 Konvex & The Shadow is composed of two French musicians, both multi-instrumentists, composers, authors and sound designers. Konvex is the Dj, the percussionist, the singer and the guy in the spotlights. Child of the French electronic music scene, drowned by the underground labels, he is always following his intuitions and inner rhythmic melodies to create sensations ! Rodéric is a drummer, a keyboardist and mastering engineer and the shadow behind Konvex. « Learning by playing » has always been his method to approach and his influences are really large (Massive Attack to The Beatles, passing through roots or produced genres like symphonic, vintage disco or indie rock) Gloomy, mysterious and often uncatchable, the music of Konvex & The Shadow, KATS for short, is a journey between darkness and light. In their recording studios, KATS collects sound takes, carves the matter, composes and decomposes each sound to create a personal music, a music that loves "human errors", considered as essential for vivid grooves and surprises. The part of darkness in KATS's project is a way to put things in perspective. After releases on several labels such as Kindisch, Get Physical and OFF Recordings, they decided in 2015 to create their own label. They teamed up with their good friend and colleague Melokolektiv. AZZUR Music was born ! So far, their energy led them mainly through Europe to showcase their special skills and being classified as « upcoming artist » by DJ MAG (nov 2016).