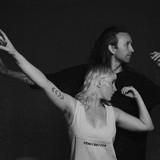 Sitting in a Wisconsin deli in 2012, Amelia Meath told her new friend Nick Sanborn she wanted to start a pop band. She proposed a simple division of labor: She’d write and sing their emotionally multivalent songs, wrapped around seemingly effortless hooks. And he’d make the beats that drove them, slightly slippery instrumentals that winked at his abstract electronic inclinations. For a time, that was the premise of Sylvan Esso. But during the last seven years, those responsibilities have morphed. Meath and Sanborn’s roles have become so intertwined that every moment of any new Sylvan Esso song feels rigorously conceptual but completely rapturous, their compelling central paradox. “Making music now looks like both of us sitting in a room together and having small arguments,” Meath quips. That dynamic thumps at the heart of Free Love, Sylvan Esso’s instantly endearing third album and a charming but provocative testament to the duo’s long-term tension. “At the heart of Sylvan Esso is this really fun argument—Nick wants things to sound unsettling, but I want you take your shirt off and dance. We’re trying to make pop songs that aren’t on the radio, because they’re too weird,” says Meath. “It’s a pop band, but we’re talking about complicated emotions.