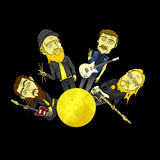 A rock band inside a kitchen during a house fire. An ironic soundtrack to the apocalypse. Lyrically Hyde, sonically Jekkyl. With a splendid mix of swing, energy, and punk’n’roll, Sweden’s The Hawkins delivers rock music at its finest. Combining high-flying, infectious melodies with exploding energy and dynamic songwriting into one vibrant soundscape. Blending the best of many worlds, The Hawkins could be described as an encyclopedia of rock. In 2021 The Hawkins is releasing the 6-track EP “Aftermath”. A mini-album that deals with the aftermath of tattered relationships, anger in between panic attacks, hearing yourself hoping for someone else to save you and finally giving up. With a dark yet humoristic energy The Hawkins goes from plastic jazz to cleithrophobic film music, via bubblegum pop and Rolling Stones -hardcore. Hurtful and fun. But still, here they are in 2021 with the new mini-album “Aftermath”. But despite the dark moments and despite the dark themes surrounding the new EP The Hawkins is not giving up. The relationship grows stronger through the constant aftermath of all the ups and downs. You just gotta balance the value of the everflowing variables.