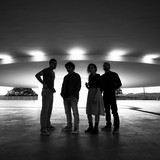 Ousel is a Brazilian band that combines the lightness of Dream-Pop with the explosion of Post-Rock. The band was formed in 2016 by Renato Fernandes (guitar and keyboard) and João Paulo Guimarães (guitar) with the intention of making songs that reflected their influences. Based on alternative and indie rock from the 90s, the band composed their first authorial songs, being the first single "Maya". Subsequently, Túlio Queiroz (bass) and Roberta Moro (vocals) joined the band, that produced their first studio album in 2019. Released in 2020, the album was highly praised by the public and critics, for having a new musical approach and still very little explored in the context of Brazilian alternative rock. The lyrics address different themes, having in common strong feelings that haunt us in our daily lives. Uncertainty, anxiety, loneliness and the search for self-knowledge and self-respect are recurrent themes in the songs. The ethereal sound brings a feeling of calm and lightness that is gradually broken by the intensity of the instrumental, providing the listener with a surreal journey and a real explosion of feelings. In 2020, vocalist Thaís Michelone joined the band that started working on their new songs. In 2021 the band released the single "Whispers" with a slightly different approach from the songs from the first work, exploring more electronic elements, the band emphasizes its dreampop side.