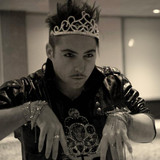 The Scroll is a Canadian neo-wave band, consisting of multi-instrumentalist J Deeh and his various collaborators.

While being one of the most eclectic band's around, The Scroll has been described as indie electronica, art rock, neo-folk, dance-rock, industrial, dream pop and shoegaze. The 'everything goes' approach to The Scroll's songwriting has been inspired by David Bowie, Prince, Scott Walker and so on. When not touring, The Scroll performs quite often in Old Montreal during the summer seasons. A duet between J Deeh and Grammy Award Winner Seal was a viral sensation back in 2016 and they have been collaborating off and on ever since. In concert, The Scroll tend to use looping technics and be visually adventurous with their live shows. The Scroll have 5 albums, 2 b-side compilations, 1 EP and 1 live album.