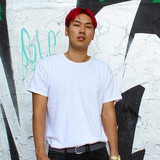 Tetsumasa is a Japanese electronic music producer originally from Nagoya City. Deeply inspired by Downtempo, Hip-Hop, Glitch, Dub and bass music in general, he started producing music under the alias of 'Devecly Bitte' delivering some full-length works for both European and Asian Labels back in the early 2000's. Currently based in Berlin since 2016, he signed two EP albums on SAIDAN and Arboretum labels, which accurately portrayed his organic and deeply cinematic sounds-aesthetic also encompassing his affinity to the Industrial and Techno scene.