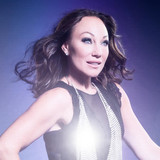 Winner of the last Eurovision Song Contest of the 20th century. The Swedish humble diva Charlotte Perrelli, returned to the competition in 2008 with the song Hero. Swedens most selling female artist

the same year. She grew up in a small town in Sweden and has been touring all over Europe and Asia with her music. Charlotte released 10 solo albums and has been rewarded several gold and platina awards for her work. Mother of four kids and still one of Swedens most iconic artists known for her voice, fashion and style. Competing in Melodifestivalen 2021 with the song "Still Young".