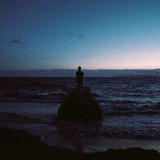 Yusuke Tsutsumi was born in Tokyo, Japan in 1991. He started composing when he was fourteen. He also composes music for films, Tv-series and commercials, such as NETFLIX series "Million Yen Woman". His love and devotion to films drove himself to shoot several movies. "The Perfect Grey" is one of his beautiful works, and was screened at Tokyo International Film Festival 2017. His style is basically Ambient and Alternative, but his romantic and dynamic approach never remains on those two categories, as his sound is exploring emotional wave without boundaries.