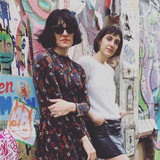 To promote their sixth studio album 'Suck this Tangerine' via Fire records, Las Kellies are coming back to Europe and UK In late March / April 2020. During 2017, Las Kellies performed more than 35 shows and festivals around the UK/EU, a BBC Radio 6 Music session for Lauren Laverne and their track 'Sugar Beat' made it onto the Official 6 Music playlist. Comprised of guitarist Ceci and drummer Sil, Las Kellies cut their teeth on the Argentinian music scene. Inspired by the raw post-punk of 70's all-female groups like the Slits and Delta 5. They have been extensively played on BBC Radio in the UK and they performed a live session for key 6 Music taste-maker Lauren Laverne, received fantastic press (US press includes She Shreds, Popmatters, Allmusic, KEXP & WFMU), have had this record released in Japan.