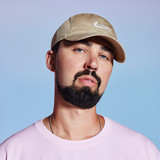 After a decade since his first release at the age of 23, Australian born Sonny Fodera has created his own brand of groove-driven and emotive house music that resonates with devoted fans around the world.   With over 50+ million global streams, Sonny has established himself as one of the most in-demand acts in the industry.   “One of the biggest draws in house” - Mixmag   His masterful mixing in the booth and renowned DJ sets have lead to sold-out tours in the UK and N.America, including a headline show at Tobacco Dock in London, Victoria Warehouse in Manchester, The Shrine in LA & Avant Gardner in NYC, whilst also holding down a summer residency at Ibiza Rocks. Sonny tirelessly travels the globe playing shows and countless major festival performances including Coachella, EDC Vegas, Tomorrowland and WMC Miami to name a few.   His standout remixes and original material have achieved more than a dozen top tens in the Beatport charts, proving that he is very much shaping the landscape for fans and DJs alike.   2019 saw Sonny release his 4th studio LP Rise via his own Solotoko imprint, as well as a remix of Calvin Harris’ Promises (with Sam Smith) which caught global attention with a remarkable 10 million streams and his latest collaboration with MK One Night (feat. Raphaella) which is currently dominating the airwaves! Unquestionably, Sonny is one of dance music’s fastest-growing acts and will continue rise heading throughout 2020 and beyond.