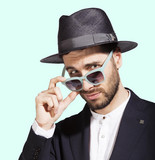 This Italian pop singer was born in San Pietro Vernotico in 1986 and began his singing career in 2003 by participating in the Festival di Castrocaro, the "New Voices Contest." His first important musical experience was in 2007 when he and his friends formed the vocal group Aram Quartet, which took part in and ultimately won that year's season of the Italian X-Factor. The group won a contract with Sony and released an album, Il Pericolo di Essere Liberi ("The Danger of Being Free"), but it failed to perform to expectations and the group was dropped and subsequently disbanded. Maggio began his solo career with his first indie single, "Inconsolabile," in 2011. After a few attempts, he won the youth section of the 2013 Sanremo Festival with the song "Mi Servirebbe Sapere" ("All I Need to Know"), which led to a deal with Universal. The track was included on his first solo album, Nonostante Tutto ("In Spite of Everything"). ~ John D. Buchanan, Rovi