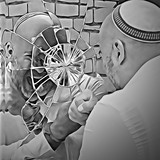 Exile And Redemption: A Neo-Hasidic Rock Opera 12 Music Videos :: One Epic Story A mystical tale of Divine providence, shattered dreams, and resilient transformation, drawing from Hasidic legend and refracted through the lens of one family's existential struggle and triumph of spirit. A symphonic journey exploring the mystery of Judaism and the meaning of life. Composed, Written, & Directed by Aryeh Shalom* Single Jewish Father. Community Organizer. Singer/Songwriter Music Production :: Barrie Maguire (Natalie Merchant, The Wallflowers, Amos Lee) Cinematography :: Shaia Erlbaum A Visual Album Produced by Old City Theatre LLC *Aryeh Shalom, is a scion of the Israelite tribe of Levi; traditionally known to be priests, teachers, singers, musicians, & guardians of the Temple in Jerusalem. He is a direct descendent, on his mother’s side, of Aaron HaKohen: Moses's brother, ambassador, & High Priest of Israel. Aryeh is a Co-Founder & Creative / Social Arts Director of The Chevra social club in Philadelphia. But most importantly, he is the proud single Father of three amazing girls.​ www.aryehshalom.com The single "A Little Peace In Our Time" will be released along with the first chapter/music video on Tuesday, September 15. The full album "Exile And Redemption" will be released along with the second chapter/music video on Tuesday, October 13. The final 10 chapters/music videos will be released once a month over the course of the year.